We had an engagement shoot last night (pics coming soon), and finished up a tad earlier than I thought we would.  We happened to be over on VSU’s north campus, and remembered that the 2007 Heart Walk was taking place at Valdosta Middle School.  Couldn’t hurt to drop by, eh?

When we got there, attendance was sparse – but rapidly became packed as 6:00PM approached (the start of the event).  Happily, we ran into some peeps from SGMC’s Information Services Department to pass the time with.

Bustin’ the moves for the I.S. Department are [Left to Right]:

I thought I would run into Mark Wombles also… but the man is a known slacker. ; – )

The event turned out great!  There were over 60 teams registered, and South Georgia Medical Center had one of the largest there!    I was asked to take a photo of the SGMC team while I was there.  The only drawback is that I did not know I would be doing this shot… and it was seriously dark by the time everyone got together for the photo.   We didn’t have any studio strobes, a cherry picker, or even a tripod with us – so we had to do this old school.   This shot is lit with a single off camera 580EX II.   Still, considering the circumstances, it didn’t turn out too shabby!    The full size version is actually pretty sweet with loads of detail. 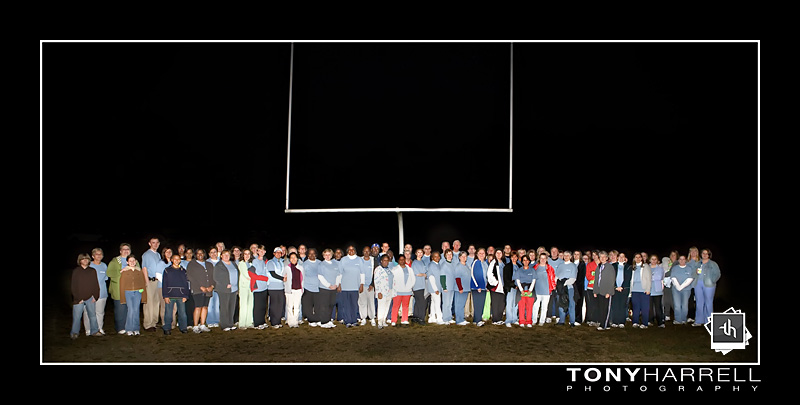 Why is this event worthy of your time and interest?

To quote the Valdosta Daily Times:

The festivities are also held each year to raise funds for cardiovascular research. This disease is the No. 1 killer of women killing more than half a million each year. Heart defects are also the number one birth defect in newborns. The only way to fight this disease is through education and raising funds for research.

Definitely make plans to attend next year! I know we will be!